By the end of 1991, I had worked at Morningstar for almost four years and was studying for my Chartered Financial Analyst designation. It made me kind of an investment expert (or so I thought). When mainstream investors bought balanced funds, they were content to hold the traditional asset mix of 60% US stocks and 40% investment-grade bonds. It wouldn’t have been for me.

What I would have chosen, I can’t say for sure, because I didn’t have a lot of money at the time and what I had was all invested in stocks. But I can recreate my thinking, with reasonable accuracy. At that time, I was well acquainted with the basic precept of modern portfolio theory: individual risk securities can be both prudent and safe when held in a diversified portfolio. For the informed investor, risk must be accepted rather than feared.

With this in mind, and based on both the latest academic research (the seminal Fama/French article chronicling the achievements of small value stocks was circulating, although the article has not yet been published) and what Sounded like common sense, I would have modified the standard 60/40 formula by favoring: 1) low value stocks, 2) high yield bonds and 3) foreign securities. My informed portfolio would have looked like this:

(This version of a “sophisticated” allocation, of course, is very different from what later became known as the endowment model, which features alternative assets. But in 1991, even Yale’s fund held mostly conventional assets. Also, as a mutual fund analyst, I only considered what could have been held by public funds.)

This wallet still makes sense to me. There is always the danger that winning strategies languish after their success is made public. Even so, small-value stocks seem like a smart choice, as they are clearly less popular with investors than growth companies and should therefore generate higher gains. Along the same lines, emerging market equities and high-yield bonds carry additional risks that merit additional compensation. And, even if their returns are not higher, investments from developed overseas markets should provide additional diversification.

But in practice, I was wrong. Over the next 30 years, the traditional portfolio outperformed my supposedly informed portfolio by 1.7 percentage points per year. Admittedly, the informed portfolio has performed well, in absolute terms. Its nominal annualized return of 10.8%, combined with the paltry inflation rate of 2.4% for the period, would have made it one of the best results in history for a balanced portfolio. But that would still have lagged behind the simple, traditional strategy.

(Strictly speaking, I should have represented the risk-adjusted performance of each portfolio, rather than its returns alone. However, the risks of both approaches were quite similar. The informed portfolio had a slightly lower standard deviation, but this advantage was offset by losses during the 2008 global financial crisis and the 2020 coronavirus downturn. Call it a washout.) 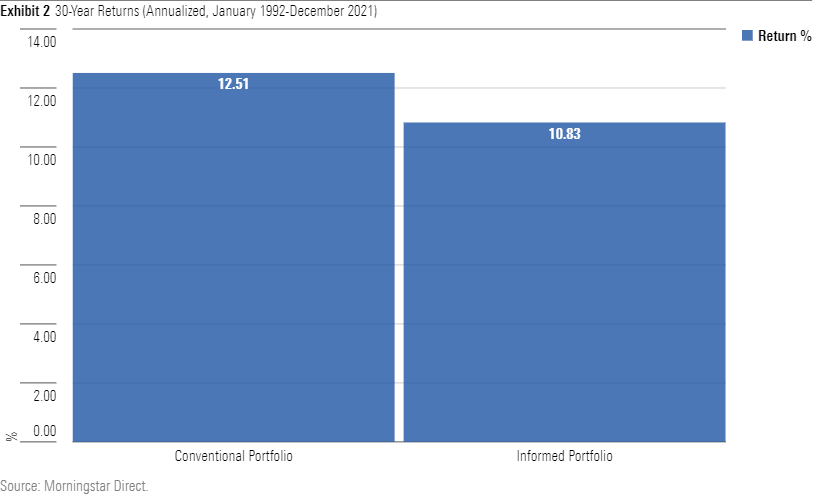 The following table shows what went wrong. It provides the annualized returns for each of the seven asset classes, along with the indices I used for the calculations. 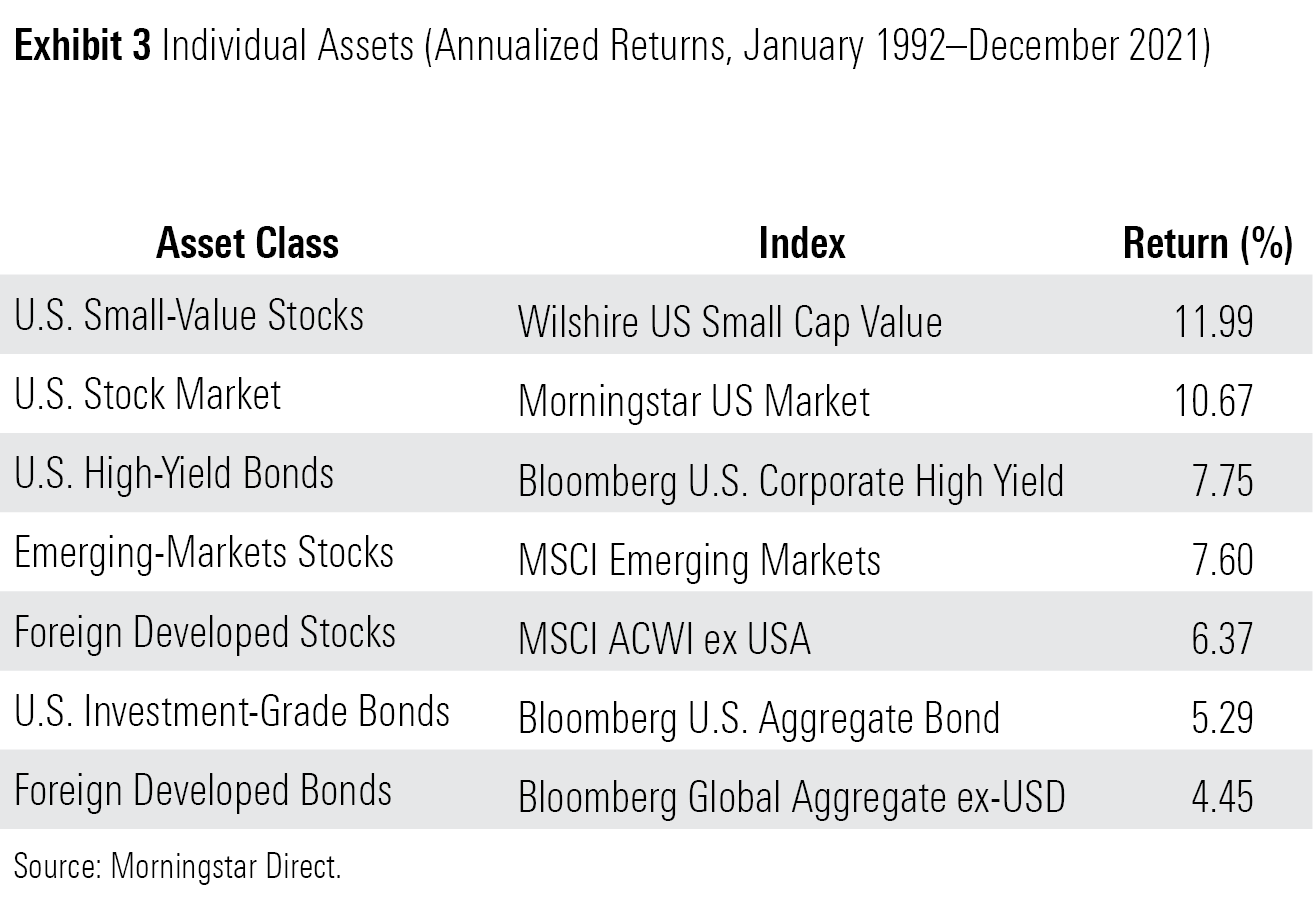 My first two decisions paid off. Although small-value stocks trailed two major bull markets, in the late 1990s and again in the past decade, they still dominated the entire US stock market. Score one for the teachers! High-yield bond funds also justified my support by beating their investment-grade rivals over the 30-year period. The selection of these two asset classes would have been both prescient and prudent. The former was decidedly unglamorous and the latter had been deeply disgraced when the “junk bond” market crashed in 1990.

Unfortunately, I would have completely missed my edge with my third decision, to invest aggressively overseas. Technically, investing half of the portfolio’s stocks and 25% of its bonds internationally would still have been underweight foreign securities, which dominated both markets, but in practice, since most investors have a strong preference for of their country of origin, adopting such a global approach would have meant betting against the United States.

To channel Ronald Reagan, never make such a bet! Staying home has worked for several reasons. The most important were technology stocks. Over the years, US stock indexes have had about twice as much technology as their foreign counterparts, a huge advantage given the sector’s success. It was also important to avoid the troubled Japanese stock market and the US shareholder value doctrine. Domestic companies were more likely to reward their outside investors than their foreign rivals. Finally, the US dollar has strengthened over the past three decades, reducing foreign-dominated returns.

Looking back, I would have made two mistakes.

One was relatively minor and easy to deal with. When putting together my portfolio, I didn’t give enough thought to how it would perform when investors collectively raced for cover. I knew low-value stocks and high-yield bonds were tied investments, as both are exceptionally vulnerable to recession fears. However, I failed to recognize that even though emerging market stocks often follow different economic cycles, they nevertheless suffer during these “flights to safety”.

So while the informed portfolio was no more volatile than the traditional portfolio, thus supporting the key tenet of modern portfolio theory, it was riskier than necessary had I combined the assets more carefully. This problem can be solved by adjusting the mix to include investments that thrive during panics, such as long Treasuries.

The second error was major and difficult to correct. It was my inability to appreciate national differences. Nor did I foresee that the United States would benefit greatly from its tech stocks, nor that so many emerging market companies would squander the benefits conveyed by their country’s economic growth, mismanagement and/or corruption. . I also didn’t realize the dollar would rebound from what, at the time, had been an extended decline.

In short, improving traditional asset allocation meant not only knowing the required investment mathematics and learning the history of asset classes, but also understanding the macroeconomic context that would affect future results. Adding new asset classes was not enough. To beat convention, I also needed to recognize which assets to omit. It is a tough mission indeed.

John Rekenthaler ([email protected]) has been researching the fund industry since 1988. He is now a columnist for Morningstar.com and a member of Morningstar’s investment research department. John is quick to point out that while Morningstar generally agrees with the opinions of the Rekenthaler report, his opinions are his own.