The pound and euro appear oversold against the US dollar and could rally if investor fears over the Russian-Ukrainian conflict begin to ease, according to a UK lender and a global investment bank.

Both the pound and the euro joined stock markets in staging a rally on February 28 after negotiators from Russia and Ukraine ended talks in Belarus and pledged to continue the talks.

Any hope that the conflict can be resolved at some point could provide support for equities and the various currencies associated with risk.

Barclays research reveals the pound has been struggling since Russia invaded its neighbor last week, but there is “significant” potential for a recovery if market fears ease. 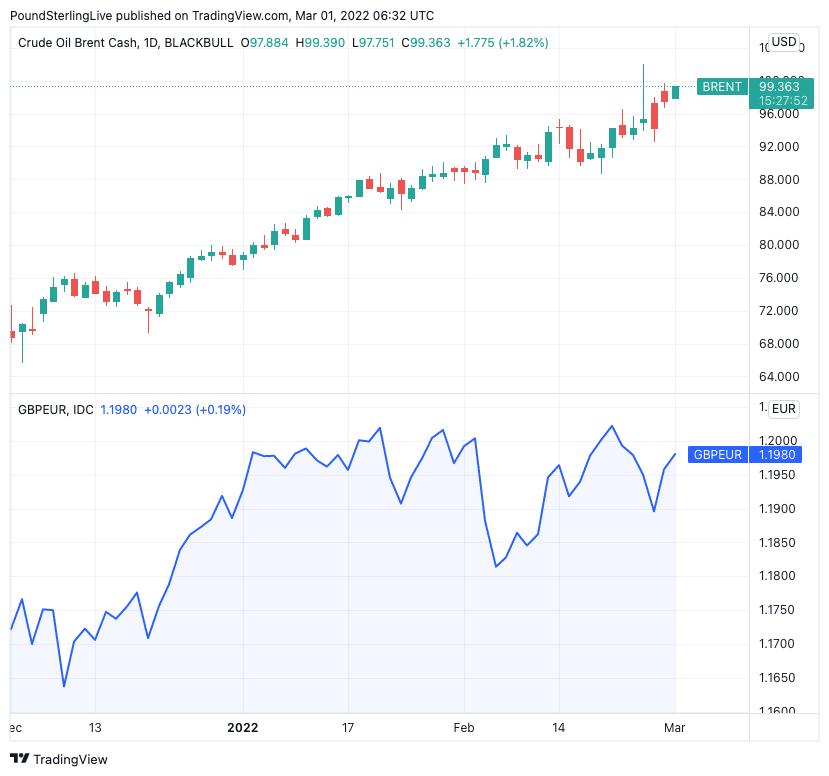 Barclays research shows that the pound and the euro are two currencies that are particularly sensitive to rising oil prices due to supply-side shocks.

Oil prices breached the $100 a barrel mark last week as fears mounted over the continued availability of Russian oil.

Prices at British petrol stations meanwhile hit a record high on Sunday, according to the motoring association RAC.

Nonetheless, markets are inherently forward-looking and tend to anticipate worst-case scenarios well in advance and ‘peak anxiety’ may soon pass, particularly if there is evidence that Russia and the EU Ukraine are negotiating.

“Just as the pound has depreciated significantly on the Russian-Ukrainian situation, it has significant room to appreciate as markets increasingly see this conflict as localized and global risk has begun. to bounce back,” Raczko said.

However, he adds that it may take some stabilization in oil prices before a recovery takes shape and, like other investment banks, Barclays does not expect a significant reversal in oil prices. .

RBC Capital Markets says it firmly believes that oil prices are in the middle of a super cycle, supported by strong fundamentals and further upside is ahead.

“To be clear, geopolitical tensions are helping to ignite the bullish view, but this thesis is purely fundamentally driven,” says Michael Tran, global energy strategist at RBC Capital.

“Global inflation is expected to rise due to supply chain disruptions. In particular, oil prices broke through the $100/bbl level on February 25 and we believe there is a possibility that they will continue to rise. ‘rise towards the range of 150-170 USD/bbl’, says Carlos Casanova, senior economist for Asia at UBP.

For sterling, the reaction of the Bank of England to recent events will remain a major concern going forward.

“The pound continues to draw underlying support from expectations that the Bank of England will raise rates for a third consecutive meeting on March 17,” said Joe Manimbo, senior foreign exchange analyst at Western Union Business Solutions.

“The prospect of higher inflation will fuel MPC fears that a wage-price spiral is developing,” said Andrew Goodwin, chief UK economist at Oxford Economics. “The main impact on the UK economy of Russia’s invasion of Ukraine is likely to be that energy prices stay higher for longer.”

But Oxford Economics also warns that ongoing developments could actually prompt the Bank of England to cool its approach to raising interest rates later in 2022.

They only see two 25 basis point rate hikes this year, in March and May, instead of the three that were expected as the Russia-Ukraine crisis approached.

But investors are positioned for much more, with OIS markets showing expectations of up to 130 basis points of interest rate hikes to come over the span of 2022.

A lower price revision in these market expectations would pose a clear downside risk for the pound in 2022.

He says that could explain some of the pound’s underperformance against the dollar lately.

But why is Oxford Economics seeing far fewer rate hikes than the market brain is currently expecting?

“The additional pressure on households also increases the risk of a more abrupt downturn in activity,” Goodwin explains.

He explains that the cap on UK energy prices imposed by regulator OFGEM means the pain for consumers will be delayed until October, when the next pricing scheme comes into force.

As a result, Oxford Economics is cutting its forecast for UK GDP growth in 2023 by 0.5 percentage points, which is higher than the 0.1 point cut for 2022.

“The MPC finds itself in an increasingly difficult situation. On the one hand, the prospect of higher inflation exacerbates their recent fears that workers will be encouraged to demand higher wage increases and companies will implement larger price hikes. But on the other hand, it will intensify the pressure on household purchasing power and increase the risks of both a sharp slowdown in growth and very low inflation in two years, the horizon on which the MPC usually focuses for its politics,” Goodwin says.